CLINGMANS DOME ON TOP OF THE SMOKEYS

I apologize for my absence but life has been kicking me in the butt for the last 2 months.  I started a new job as a Tech at UT Medical Center and we are just 20 days away from my wedding.  So with all this excitement my SOTA activities had to be put on the back burner.

Well as everyone knows once you get the SOTA bug your infected.  I had been itching to get back on a summit for several weeks so I decided to get in a quick activation yesterday.

I picked Clingmans Dome W4C/WM-001.
At 6,643 feet, Clingmans Dome is the highest point in the Great Smoky Mountains National Park. It is the highest point in Tennessee, and the third highest mountain east of the Mississippi.  Reputedly known as "Kuwahi" (the mulberry place) by the Cherokee Indians, the mountain was dubbed "Smoky Dome" by American settlers moving in from other areas. In 1859, the mountain was renamed by Arnold Guyot for compatriot Thomas Lanier Clingman (1812–1897), an American Civil War general who explored the area extensively in the 1850s and then spent many years promoting it. Guyot named the mountain for Clingman because of an argument between Clingman and a professor at the University of North Carolina, Elisha Mitchell, over which mountain was actually the highest in the region. Mitchell contended that a peak by the name of Black Dome (now known as Mount Mitchell) was the highest, while Clingman asserted that Smoky Dome was the true highest peak. Guyot determined that Black Dome was 39 feet (12 m) higher than Smoky Dome. 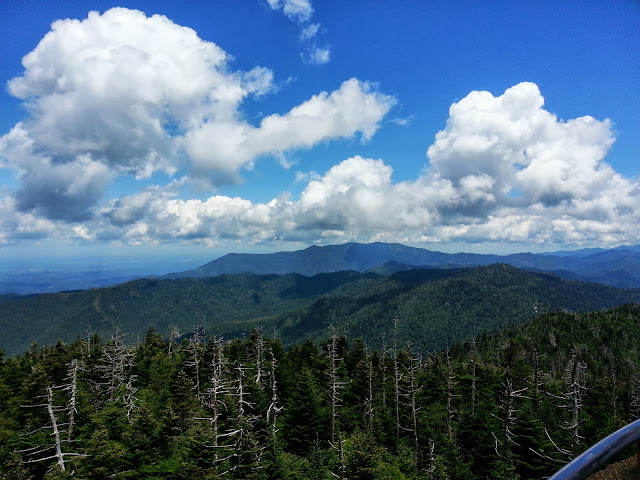 As you can see there are many dead trees visible in this photo. below is an excerpt from the national park service about the problem.


What's killing the trees at Clingmans Dome?
The balsam woolly adelgid (Adelges piceae) is an insect pest that infests and kills stands of Fraser fir (Abies fraseri) in the spruce-fir zone. This fir occurs naturally only in the southern Appalachians and used to be the dominant tree at the highest elevations. The adelgid was introduced on trees imported from Europe, and the fir has little natural defense against it. By injecting the tree with toxins, the adelgid blocks the path of nutrients through the tree. The trees literally starve to death, and thousands of dead snags are all that are left on the highest mountain peaks. 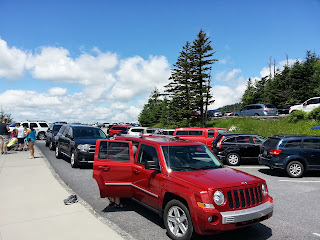 To reach the trail head turn off Newfound Gap Road 0.1 mile south of Newfound Gap and follow the 7-mile-long Clingmans Dome Road to the large parking area at the end.  As you can see the large parking area was quite full upon our arrival.
This area of the park is well visited.  And you can expect to see a lot of people on a beautiful day.  Kendall and I enjoyed people watching as they watched and took pictures of us.

The trail to the summit is a short but steep half mile.  It is a paved path with some awesome views.  There is also an Information Center and Gift Shop at the trail head.

At the summit is an observation tower with great views of the surrounding park.  The concrete observation tower, built in 1959, offers a panoramic view of the mountains in every direction. The Appalachian Trail crosses Clingmans Dome, passing immediately north of the observation tower.  Kendall and I setup at the intersection of the AT and Clingmans Dome Trail.  I wanted to give us a little distance from the tower to provide us with a bit of privacy. 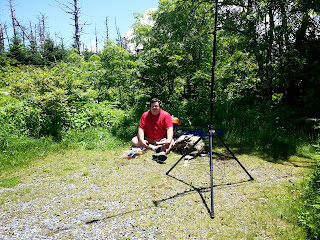 We did get the opportunity to  speak with many people as I activated the summit.  I am certain the chasers noticed breaks in my broadcasting. Kendall  and I were constantly asked questions about the gear and what we were doing.  We tried to answer everyone's questions and represent SOTA as best we could.

I think Kendall enjoyed this a great deal.  In fact she wants to keep a log of just how many people stop and ask us question, or take our photo on the next populated summit.

We made some great contacts.  AD5A, W6UB, N1EV, W0MNA, W0ERI, W5ODS, W4IHI, KB1RJD, K5RWP, KB1RJC, KC5BMZ.  The propagation into Texas from Clingmans Dome was working as several of my contacts were from that area.  But propagation was not the best when I tried 40m so Kendall and I decided to pack up. 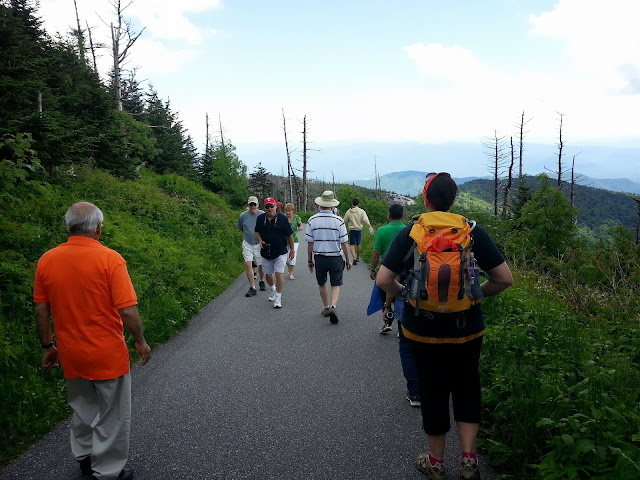 I think Kendall is starting to enjoy SOTA.  In fact she has expressed interest in getting her license.  I hope she does.  She is a teacher in a Magnet School and we spoke about how she could incorporate radio and geography into her teachings.  If any of my fellow hams out there have any resources for teachers to promote amateur radio please let me know. 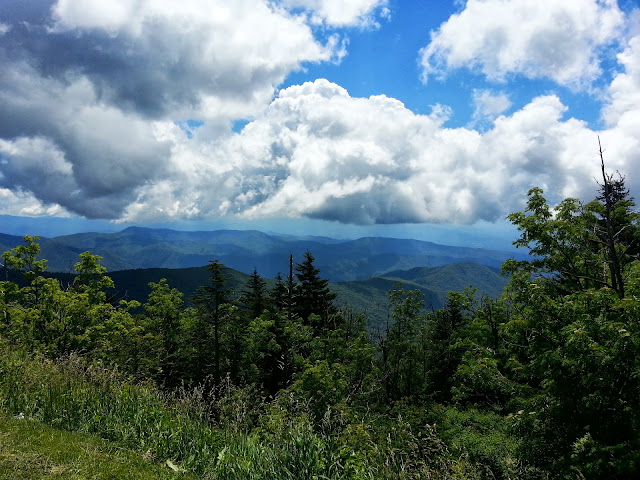 We had a great time today and I would like to thank all the chasers.  If you get the chance to visit the Smokey Mountains bring your gear.  Clingmans Dome is very accessible and is well worth the visit.  Thanks everyone for reading my Blog.  I hope you enjoy reading as much as I enjoy writing it. 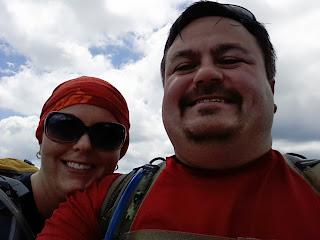 Look for a review on my new pack I used on this summit.  I have spoke about Eberlestock packs in the past and i finally purchased one.  It is an excellent pack and I will get a video review ready for my next post.

Enjoyed your photos and report John, very good!
I enjoyed a visit there a few years ago before SOTA started it that region. Hope to get back one day.

Nice chasing you, John. You were my first successful chase. Very good report.
Hope to do some Smokey activations myself sometime on vacation.

Congratulations on your first chase! Be careful this SOTA stuff is highly addictive. If you do come to the Smokeys and have any questions I would be happy to help. 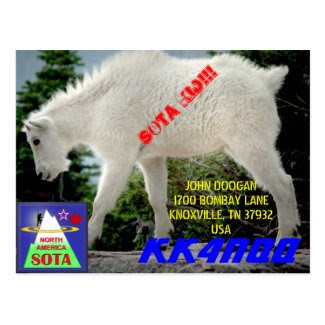